This summer, you might spot a white cargo van with NASA markings unloading some mysterious-looking technology at the Pittsburgh Airport. No, it isn’t partnership between CMU and NASA to explore the final frontier from Pittsburgh. It’s artist Tobey Fraley bringing back “Fraley’s Robot Repair Shop”. 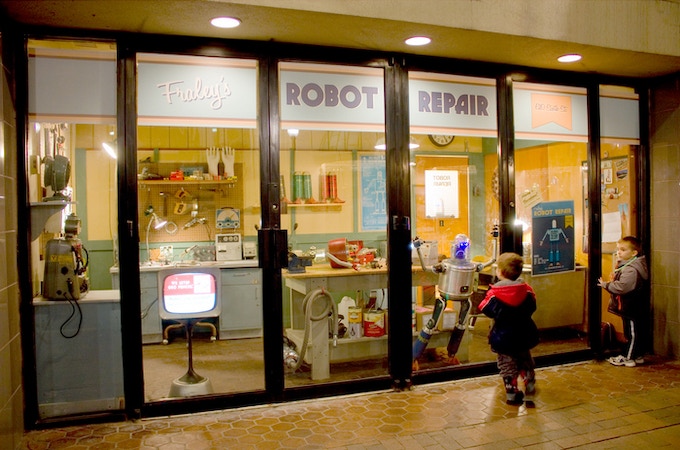 From 2011–2012, for 17 months, Pittsburghers and visitors were tickled by “Fraley’s Robot Repair Shop” downtown. The Lonely Robot waited for his human return, and Pittsburghers did their best to keep the robot company.

Mr. Fraley wants to bring the storefront back, and he’s turned to Kickstarter to make it happen.

Mr. Fraley’s NASA themed van grows out of a life-long fascination with flight and space-travel. That fascination is why he contacted the Pittsburgh Airport and offered to build a new Robot Repair Shop as a gift. The airport was more than happy to give him a spare storefront near gate A15. 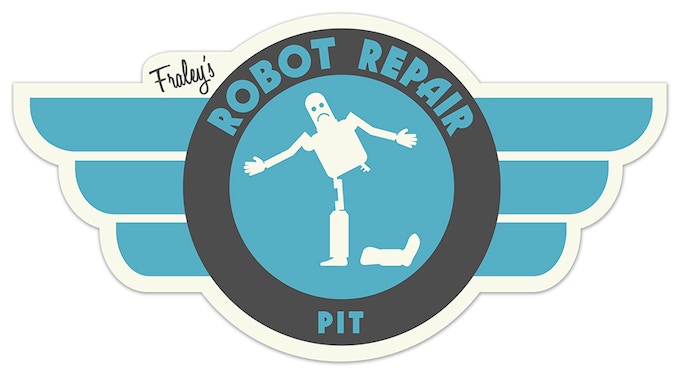 That taste for futuristic design shows in Mr. Fraley’s favorite classic robot: HAL–9000, from 2001, A Space Odyssey. “I can’t tell you how many times I’ve watched that movie. Technically speaking, he was probably more of an operating system unless you think of the entire Discovery spacecraft… as the robot’s form. A robot doesn’t always need to take on a humanoid form.” Perhaps an ironic contrast, considering Mr. Fraley is so well known for his whimsical humanoid robots.

The exhibit was popular when it was installed in downtown- so much so that the Kickstarter raised its funding in only five days. Mr. Fraley credits the fans for the Kickstarter’s success:

There was a couple that had their photo taken out front to use as their Christmas card, there was a guy who rode into town on the bus every two weeks with his son to see what Lonely Robot was up to (while also getting to spending quality time with his child), people would shove notes under the door for me to find, it had a hard core group of followers

What drives that sort of fandom? Mr. Fraley suspects it’s how the display rewards you for paying attention.

The shop is unassuming. Tucked between actual operating stores it could even be missed if you’re not paying attention. I think discovering it for the first time really impacts people and leaves an impression. It’s an entertainingly random installation on a grand scale. That in turn draws people in, taking them out of their daily grind, if only for a moment. It’s not a traditional piece of artwork either, you really need to take a few moments and absorb what you looking at. The books on the shelf, the scraps of paper pinned to the bulletin board, the graphics on the paint cans, the shipping labels on the cardboard boxes, they’re all customized and all telling a story. It’s a bit ‘Where’s Waldo’ in that way. It’s a treasure hunt that you can really get sucked into.

Beyond that, Mr. Fraley credits the Kickstarter’s success to Pittsburgh itself. “Pittsburghers are… really proud of our city… having as the welcome mat a totally unique art installation at the airport is… yet another quirky, memorable thing that makes Pittsburgh stand out as a different city.”

It’s not just his fans that are part of that, either.

We have great arts entities in Pittsburgh such as The Greater Pittsburgh Arts Council and The Pittsburgh Cultural Trust. Those two in particular have really helped me with my career. In fact going back maybe 6 years I took a workshop with GPAC called Public Art 101. It was the catalyst for me to take my work in the direction of public art projects such as this one.

Speaking of Pittsburgh pride, Lonely Robot is going to be sharing the airport with two icons of Pittsburgh statuary: Franco Harris and George Washington. Fraley thinks it’s a great match. “I’d love to get a photo of the robot between Franco and George. What a disjointed, nonsensical grouping that would be. It’s totally humbling though thinking that the first thing someone sees as they step off their plane is going to be this art installation. It’s really an honor many artists would be thrilled to have.”

The dream version of Robot Repair will look like your flight to Pittsburgh has somehow transported you to an alternate reality. Robots are suddenly common-place and people actually pay to get them fixed instead of sending them to landfills. It will have the same retro-futuristic feel of the prior shop with a slight aviation and travel slant. A globe marked with pins showing how they “Care for the World’s Robots” will be proudly on display, rotating in the front window. A slightly tattered sign on the wall will advertise that the shop “Now Services Autopilot Robots”. The first dollar taken in by the shop will be thumbtacked on the bulletin board. The little odd details are what made the first installation work so well and I have a bunch planned out for this new installation.

For those wondering if the “Lonely Robot” has a “real” name: no. In true robot fashion, each robot is given only a number. Mr. Fraley admits, however, that the Lonely Robot has exceeded his programming, and has joined the rest of us in using that name for it.

Mr. Fraley’s Kickstarter ends on June 17th. He’s already reached his funding, but is offering a variety of rewards and stretch goals until the project closes.