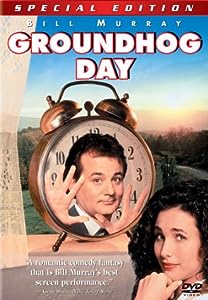 Technically Groundhog day is February 2 – but Pittsburgh filmmakers is showing the film Groundhog Day this Sunday, January 24, 2010 – just in time to get you in the mood for the actual groundhog day next week.  Groundhog Day is Part four of five in the Pittsburgh Filmmakers January Sunday Night series: American Comedies.

Here is the description from the Pittsburgh Filmmakers website:

“The miracle is that as the movie becomes more serious, it becomes funnier.” – Stanley Fish,NYTimes

Bill Murray was never more delightfully rude than in this clever film that’s still fresh and funny. It’s even getting scholarly attention. Murray plays Pittsburgh weatherman Phil Connors, who inexplicably keeps waking up in the same day at a B&B in Punxsutawney. The Brits loved this film and awarded the original screenplay their version of an Academy Award. (Harold Ramis; 1993; 101 min)

Feel like your life is straight out of the movie? This Tribune Review reporter is looking to talk to you.

Do you get sucked into the “Groundhog Day” vortex every time it plays on cable? Are you the kind of fan who has seen the film again and again and again? Tell us what it is about this tale of do-overs and second chances that appeals to you. Contact Mike Machosky at 412-320-7901 or mmachosky@tribweb.com.