You are here: Home / Events / Bikes and Beer 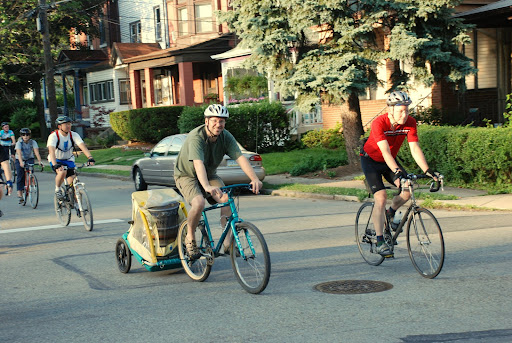 Yes, That is a keg in that child carried.  Scott from East End Brewing is very serious about the Pedal Pale Ale.  For the third year in a row they will bike the beer to the tap spot and all bikers get a free beer from the first keg.

If you’re just joining us, here’s how this works: You show up here at the brewery on Friday, May 23rd at 6:30pm (Yes, we’re still open for Growler Hours that day, but I’ll warn you that car parking might be
tight with all the bicycles… nice!), get signed in with someone who looks like they’re in charge, collect your token – a very important step, and be ready to follow the bouncing keg(s) that I’ll be pulling,BY BICYCLE to this year’s mystery tap spot.  We’ll take a low-speed, family friendly, meandering, human-powered, beer delivering, two wheeled tour of Pittsburgh’s greater East End.  Upon our arrival, we’ll get the keg(s) into position, and for everyone who made the trip, the first round of Pedal Pale Ale, from the very first keg of the year, is on me!

Yes, the pace will be gentle.  And no, there won’t be very many hills….need I remind you that I expect to be pulling at least one 160 pound keg of beer behind me.   Besides, I spend all my waking hours brewing these days, which leaves very little time to train for a ride like this. We’ll also be using a much nicer trailer than the  poor thing I dragged along last year – or so the guys at Bike Pittsburgh (www.Bike-Pgh.org) tell me.  Less roadside bungee cord wrangling should be involved this year, and all that time can be better spent with a pint of fresh beer in hand!